Just beyond Canterbury and very close the The Oak & Rope Company’s workshop home, the rolling hills and valleys of the chalky North Downs come into view.

Following the old A2 towards Barham, a gate bears a sign for the Simpsons Wine Estate Roman Road Vineyard.

Surrounded by beautiful old trees and backed by a tall church spire, a peaceful and sheltered south facing slope is planted with serried rows of Chardonnay, Pinot Noir and Pinot Meunier vines, marked by elegant marker posts bearing the Simpsons logo, the name of the grape variety and the date the vine was planted.

This vineyard, along with the Railway Hill vineyard on the far side of the village, makes up the 90 or so acres of this English wine producing estate, founded by Ruth and Charles Simpson in 2012 and producing over 200,000 of bottles of sparkling and still wine.

But the route to making wine in Kent did not start here. 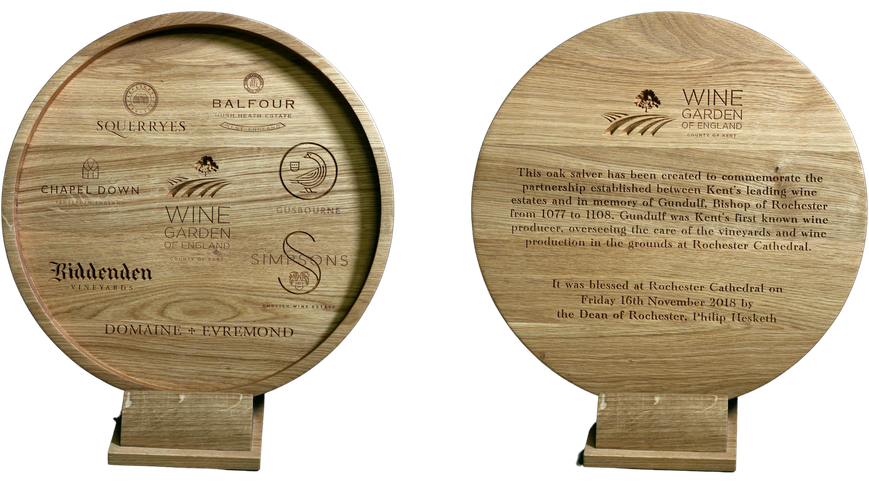 Oak salver for the commemoration, celebration and blessing of all the members of The Wine Garden of England

With professional backgrounds in the humanitarian sector and pharmaceutical sales and marketing, holidays for Ruth And Charles involved visiting wine growing areas of Europe. At the end of the nineties, temporarily living in Azerbijan, Ruth enrolled in a wine marketing course at the University of South Australia.

Roll forward a couple of years, a business plan was formulated and suitable land was being sought for a wine estate in the emerging new world wine-growing areas of Australia or New Zealand. But events of September 2001 made them decide to change their focus to nearer home, the Languedoc region of Southern France, where new world methods of wine production were beginning to be accepted.

In 2002 the Simpsons became the proud owners of La Domaine de Sainte-Rose, a 120 acre estate near Servian in South of France.

The couple set about replacing the old and unusable vines and planting 14 different varieties of grape and fully renovating and improving the winery.

Ten years on and Sainte Rose was producing 400,000 bottles of wine a year and shipping to the UK, USA and Canada. The Simpsons were enjoying their life in the South of France, but felt they had another project in them, to produce a sparkling wine in the UK. 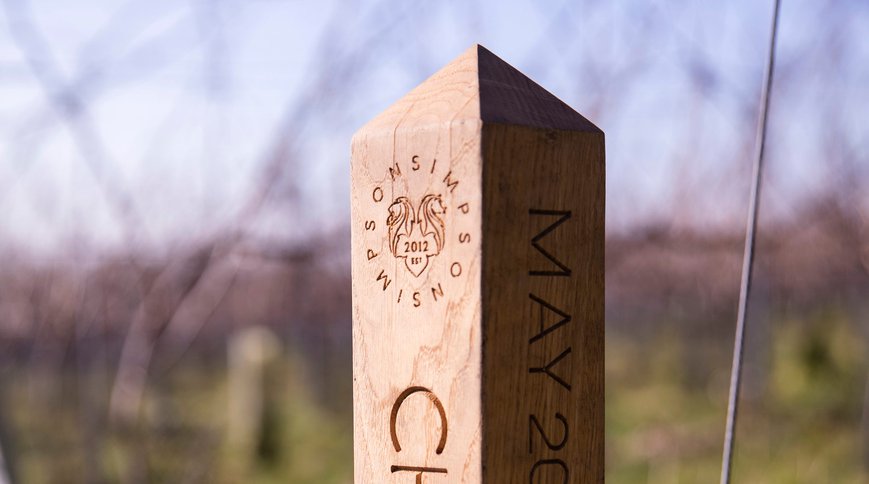 In 2012 they took the plunge and purchased two perfectly situated, chalk-soiled parcels of land in the village of Barham in Kent and with the help of their trusted manager and winemaker back in France holding the fort at Sainte-Rose, the couple decided it was time to make their home base back in the UK. In 2014 they set about planting the 30 acre Roman Road vineyard with the Chardonnay, Pinot Noir and Pinot Meunier vines we see today, their plan to make high end, English sparkling wine. In 2016 and 2017, realising the quality of the the Kentish “terroir” and climate, they planted the Railway Hill vineyard including other clones suitable for making still wine and in 2019 a further vineyard came online.

Premises in the heart of the village were found for the winery and the Simpsons English Wine Estate was born. The first harvest in 2016 produced 22,600 bottles of sparking Canterbury Rose rose, Chalklands Classic Cuvee, Flint Fields Blanc de Noirs and Roman Road still Chardonnay.

By 2019 over 200,000 bottles of still and Method Traditional sparkling were made. The winery employs the latest bottling technology using Vinolock glass stoppers and a nitrogen generator to produce elegant and sophisticated packaging their Railway Hill Rose 2018 and Derringstone Pinot Meunier 2018. 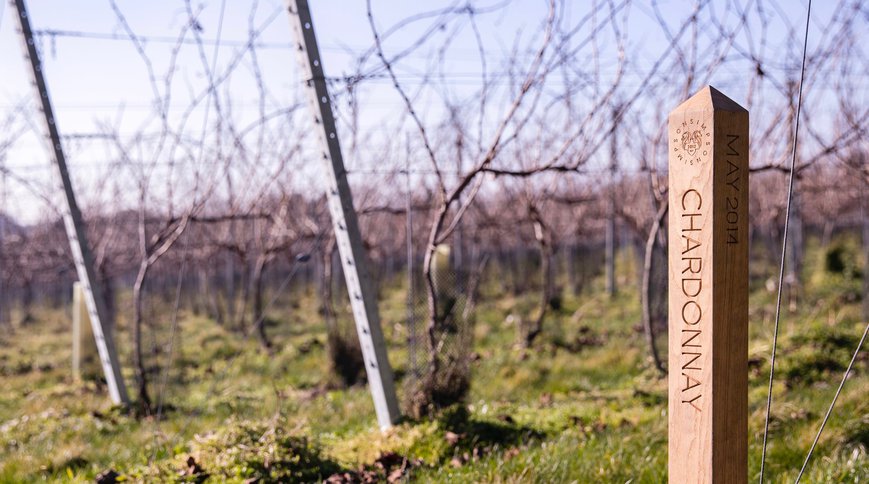 Today the Simpsons English Wine Estate goes from strength to strength much to the surprise of their French neighbour at Domaine de Sainte Rose and to the delight of their English neighbours in Kent! Their award winning range of still and sparkling wines can be found in the finest retail and dining establishments across the UK, Scandinavia and Canada. Their crowning glory to date was to win Best in Show and the Platinum Medal for their Roman Road Chardonnay in the 2020 Decanter Wine Awards, one of only 50 wines to have won the award, along with a host of other notable awards.

2022 sees the Simpsons celebrating their 10th anniversary of their fortuitous purchase of the land in Kent. Vine may be growing under their feet but not grass, and they are remaining true to their values of savour faire, provenance and innovation. Belief that the UK wine industry must must develop in a sustainable fashion has led them to become part of the Sustainable Wine Scheme of Great Britain. More land is being purchased and planted this Spring.

Since the establishment of the Estate in 2012 the Simpsons have forged a key partnership with The Oak & Rope Company, with whom they share a custodianship, championing British-made products. Both businesses are advocates for craftsmanship, innovation and a passion to keep rural jobs and skills alive. The Oak & Rope vineyard signage at Simpsons Wine Estate stands sentinel to this shared ethic. 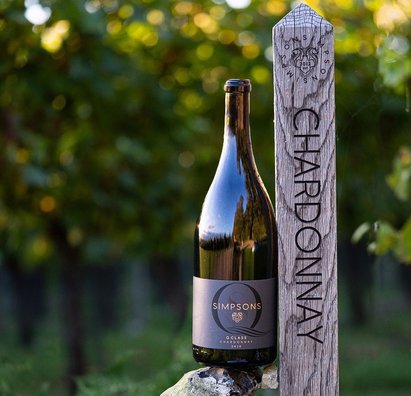 Both are better with age...

We love seeing our signage pop up on Instagram feeds around the world when wine critiques review and write about the growing popularity and respect for English wine.

This photograph has kindly been shared by Norwegian food and wine writer Kim Thomassen. He is a big fan of our wine region and Simpson's Wine in particular.

From the picture we can see further evidence of shared qualities between Simpson's and Oak & Rope. When you are working with the best ingredients and know what you are doing, oak as well as wine gets better with age... 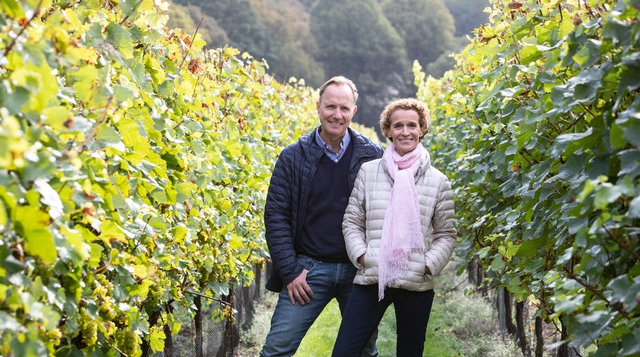